Showing posts from June, 2009
Show all

Sometimes a friendships can turns to more…

Are you considering having a love affair with a married or engaged man? Before you do something you may regret, consider the pros and cons of having an affair.

But what I like to share is only the bad part, nothing good about having an affair… Before you have an affair, consider the implications the affair might have on other people.

The Downsides of Having an Affair
While there are several positive elements of having a love affair with a married man, the downsides are many and potentially devastating...

Getting Caught
The married man is putting his marriage or relationship at risk having an affair with you, and you risk the same if you are also married. You may not care about being caught, but your feelings may change if your spouse finds out and files for divorce. Sometimes we don’t realize what we have until we lose it.

Being caught involves more risks than just divorce. It can also ruin your career or your reputati…
Post a Comment
Read more 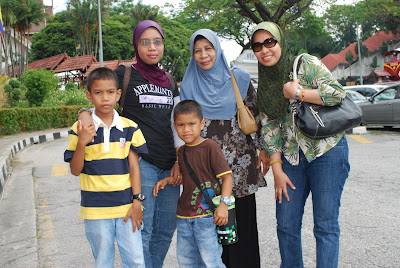 Last school holiday, I spent one weekend with my nephews... On Saturday, we went to National Museum. We move from the house around 10am and ended our visit about 4pm... wow... a long visit to only one place... but they had fun.. for them going out of the house, hanging and walking around and eating out is more than fun and that is what they want most other than going to the beach.


My junior photographer took this pic... quite nice huh!

All of us at Muzium Orang Asli

On Sunday... At first the planning was only Sepang Goldcoast, but we got one wedding invitation in Banting... So, all of us going with two cars. From Banting to Sepang Goldcoast is about 30km, so if you are coming from KL, take the KLIA road, much nearer. The kids a bit sad coz at first they thought, they will be allowed to swim and playing on the beach but when we got there it's a bit late and all the adults don’t want …
2 comments
Read more

How do you feel when guys check out your boobs?

June 28, 2009
Sometimes, when we talking to a guy, they staring at our boobs. Hey my-eyes-are-up-here... Men see boobs and they can't help but look. But nowadays, many women go out in revealing shirts with the exact intention of grabbing a man's attention, so why is it that in certain instances a guy taking a look makes us feel angry, annoyed or disgusted? As for me please have enough respect to actually look at me when I am speaking. But as for some men, “as long as you keep showing them, we’ll keep looking at them, if you don’t want them seen, cover them up”.

How do you react when you catch a guy looking at your boobs?

June 25, 2009
When obstacles arise, change your direction to reach your goal, not the decision to get there. But if you are going to be so narrow minded then there will be no progress. How to change the direction? We scared to change but when problem occurs, it should not be ignored. It is a test and a situation and only get better if we face it, if not you will not be led to your right place in the flow to your goal.

Today I am feeling lucky, even blessed, to have such a fulfilling life. I credit this to following my heart. You see, after many years of self-exploration, I have a low tolerance for not being happy. In other words, I can no longer ignore my heart when it speaks to me. This can lead to having to make “difficult” decisions, but it ALWAYS pays off in the end. The result, I am in the flow of life and this leads to prosperity in all ways.
Part of being in the flow is being of service. When you give to others, you also reap the…
Post a Comment
Read more

June 24, 2009
Ryan O’Neal is set to marry cancer-stricken Farrah Fawcett and has revealed that his long-time love is “fighting for her life,” ABC News reported Monday.

“I’ve asked her to marry me, again, and she’s agreed,” an emotional O’Neal told Walters in excerpts of the interview on ABC News website.

O’Neal and Fawcett, 62, have been romantically involved off-and-on since 1982. The couple have a son together but have never married.

“I used to ask her to marry me all the time,” O’Neal said in the ABC interview. “But it just got to be a joke, you know. We just joked about it.”

O’Neal has been a constant presence at Fawcett’s side since news of her illness broke.

June 17, 2009
Bananas contain three natural sugars - sucrose, fructose and glucose - combined with fiber. A banana gives an instant, sustained and substantial boost of energy. Research has proved that just two bananas provide enough energy for a strenuous 90-minute workout. No wonder the banana is the number one fruit with the world's leading athletes.

A banana can help overcome or prevent a substantial number of illnesses and conditions, making it a must for our daily diet.

Depression: According to a recent survey undertaken by MIND among people suffering from depression, many felt much better after eating a banana. This is because bananas contain tryptophan, one of the twenty common "amino acids" that make up all proteins that the body converts into serotonin, known to make you relax, improve your mood and generally make you feel happier.

PMS: Forget the pills - eat a banana. The vitamin B6 it contains regulates blood glucose levels, which can affect your mood.

June 10, 2009
I can almost see it
That dream I’m dreaming but
There’s a voice inside my head sayin,
You’ll never reach it,
Every step I’m taking,
Every move I make feels
Lost with no direction
My faith is shaking but I
Got to keep tryin
Got to keep my head held high

The struggles I’m facing,
The chances I’m taking
Sometimes they might knock me down but
No I’m not breaking
I may not know it
But these are the moments that
I’m going to remember most yeah
Just got to keep going
And I,
I got to be strong
Just keep pushing on,
cause

sazzy
I'm a traveler. I hate the comfortably of home, but love being there. I hate lonely but I want to be alone. I'm a coffee drinker, less sweet please. Loves vege, fruits & white meat. I'm in love and i'm a believer..